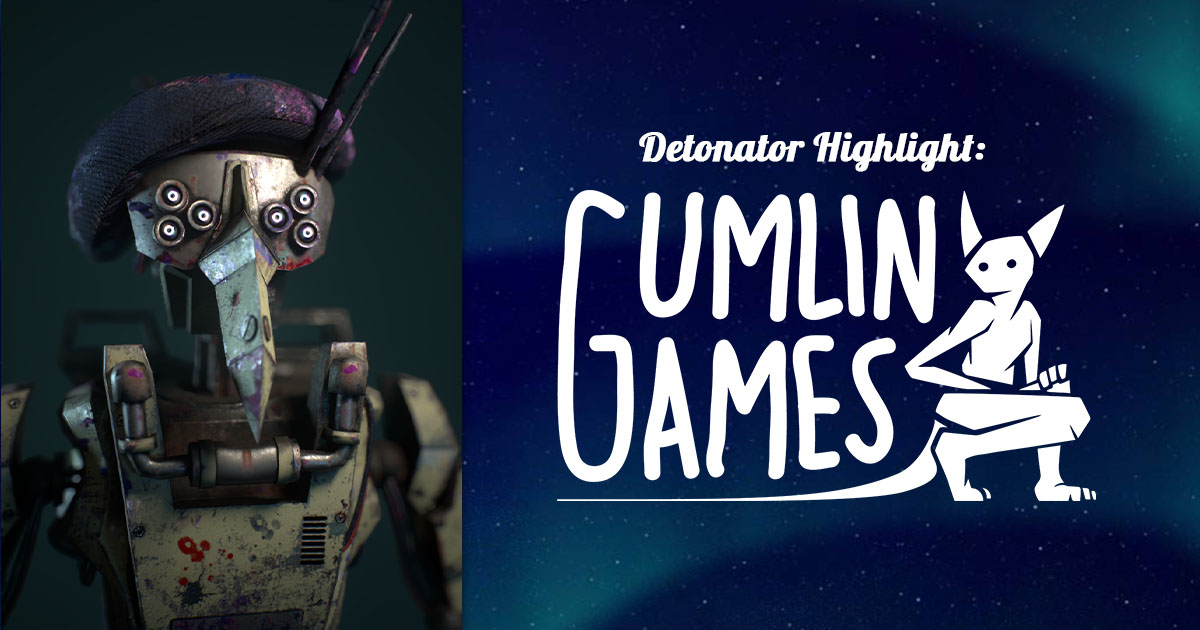 Welcome to the first in a series of articles where we introduce our detonators! We have so many talented teams to showcase, and the flock just keeps on growing. First up, the very first studio to join us in Game Village Jörn: Gumlin Games!

Gumlin Games consists of Lukas, Pontus, Fredrik, Simon and Carl. They started out like so many others in the indie dev scene: a group of students – in this case at Luleå University of Technology in Skellefteå – became friends and started working on a game project together. Following their time at the university, the team has been working continuously to improve and expand upon their original concept and since then they have received support from several well respected organizations to continue developing their game, including Goodbye Kansas and Arctic Game.

You all met at Uni, but how did you end up working on a game together?

Simon: It started during a series of Arctic Game events that Micke (whom you might know from Mind Detonator) hosted called OpenBox. It’s a sort of creative space where you could work on more or less whatever you wanted, like brainstorming game projects or work on stuff in Blender. We started out there, coming up with another game project that never really left the idea stage.

Pontus: That game was called Reactor, but it was too big of a project. We wanted something with a more reasonable scope. We came up with a bunch of ideas and then we voted for the one we liked the most. The Machine was the winning concept, that’s the game that eventually turned into Mechanical Sunset.

What made you decide to take the plunge and join Mind Detonator?

Fredrik: Mind Detonator showed interest, and seemed to really believe in us. The option to live in Jörn and really focus on our game was also enticing, finding apartments in Skellefteå at the time was very difficult.

Carl: All in all, there were so many things that lined up perfectly, joining Mind Detonator was just the right thing to do.

How would you say your work has changed since you moved to the Game Village?

Fredrik: For me, well I now have the opportunity to work full time on the game. It feels much more real when I get paid to do this. It enables me to take the project much more seriously and work in a much more focused manner, knowing that we’re all doing this for real now.

Let’s move on to the game! What is the elevator pitch for Mechanical Sunset?

Fredrik: This is the game for people who love pressing interesting buttons. If you’ve ever walked around in a game world and seen some nice looking control panels or huge electrical boxes, and really wished you could press all of the buttons to see what happens, then this is the game for you.

Alright, I’m hooked! What sort of genre does the game belong in?

Fredrik: It’s a puzzle adventure. You walk around in a heavily weathered machine city, and to make progress you will have to solve various puzzles, most of which are based on actual mechanics and electrical engineering. You will have to utilize some real world skills here, like how to change a fuse or connect electrical wires.

Tell us a bit about the story of the game.

Fredrik: A meteor is heading straight towards the earth, and in an attempt to stop it humanity tried to use some sort of ray to make time stand still in the impact spot. However, something went wrong and most of the earth is frozen in time, except for one spot that keeps moving around. So everyone who wants to continue enjoying the benefits of passing time will have to move along with this spot, which is why they built a huge, mechanical wandering city to keep moving with the time. During the game, a problem will arise with the mechanical city that will make it unable to keep moving unless the player intervenes. That is the role of the player, you will have to either solve the issue with the machine or find another way of solving the issue.

What are some of the influences behind Mechanical Sunset?

Fredrik: A lot of our inspiration comes from Machinarium, but visually also games like Observer. When it comes to worldbuilding we are heavily influenced by the miniature worlds of Sven Nordqvist, Swedish writer and illustrator of children’s books. Like his series about Pettson and Findus, with tiny little houses in odd places where they wouldn’t reasonably be. It gives it all a very Swedish touch, and that makes it especially great for us to be in Jörn. We do want to take a little piece of Jörn and place it right there in the huge machine city.

As far as the puzzle design goes, one big influence is another indie title from a Finnish developer: Infra, a game where you take on the role as an engineer sent out to inspect some infrastructure in a city that is in far worse decay than they previously thought. Infra has a lot of engineering themed puzzles, a lot of buttons to press to start machines and such.

There you have it folks, Gumlin Games! We’re very excited to be part of this journey, and can’t wait to see what you all think of Mechanical Sunset once it is released! Make sure to wishlist Mechanical Sunset to not miss out on when it hits Steam.